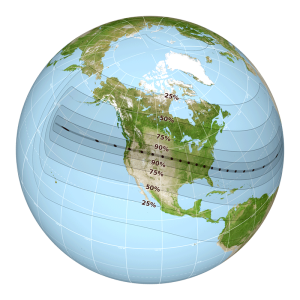 It’s time for an extremely rare and unbelievable celestial event, The American Total Solar Eclipse. The last total solar eclipse to pass over the entire United States of America took place on June 8th, 1918. This great one’s path will cross our nation from West to East, from Oregon to South Carolina, covering all of the contiguous states. Only those in the full umbra, or full shadow, of the moon will have this gift presented to them. This powerful astronomical phenomenon will turn day into night for just a few minutes. The moon will pass directly between the sun and the earth taking several minutes to reach the total eclipse of the sun.

The power of this eclipse is exceptionally strong. It will be necessary to protect the retinas of your eyes. Looking at any of an eclipses phases may cause permanent eye damage.  Please click here to visit the NASA website for safety and more information. The shadow of the eclipse will touch down in the northern part of the Pacific Ocean reaching Oregon at 9 a.m., and reaches total eclipse at 10:15 a.m.PT, then begins it chase across the United States. In New York it will have reached a partial solar eclipse (same eye safety precautions), and weather permitting, it will be visible from 1:23 p.m. attaining its maximum at 2:44 p.m. and concluding 4 p.m. DST…………….P.

On Thursday, September 1st, there is a New Moon, Solar Eclipse in Virgo.  This is a significant Eclipse.  It generates powerful energy because the Sun and Moon are all aspecting or in a relationship with the Sun and Moon, along with the planet Saturn, the governor of restructuring, and wouldn’t you know it, government! To top it all off, the nefarious and mysterious planet, Neptune, brings his imagination, magical tricks and dreams to the party. Mars, the warrior planet wants to do a square dance with the illusionary Neptune. Early arrival Mercury is tottering on the doorstep, he doesn’t know why everyone won’t listen and is passing him by.  He got his invitation, but wastes his time passing out misinformation and trying to re-direct the other party-goers.  Thank the Universe that the health-minded and microbe-aware Virgo is giving the party.  Any antics Mars pulls could need medical attention. Watch your step, Mercury, you’re today’s lord of misinformation, the celestial guests are passing you right by. There will be other planetary visitors, but I think Saturn and Neptune will have a big influence on how noisy and loud the party will get.  They can bring a profound influence on the cosmic celebration.

There are a lot of possibilities with this gathering.  The noisy television pranksters who deliver the media news could bring Mercury’s poor direction, and ideas to the outlets, that may upset and shock some of us party attendees, false illusions of the  system could get out of hand. The unsolicited gifts, the favors and goodies usually presented as entertainment will become fodder for debate. Many of the stories told in debate are illusions and fail as debatable script, this along with the rhetoric turn out to be the tomes of the fear provoking war mongers.

The surprise of the party is the wafting scent of fresh brewed coffee. Now, all the wallflowers make an excited run for the sanitized Virgo kitchen.  Yes, it’s that time. They’ve awoken, and they really want to smell the rich scent of the truth. No more sitting around waiting for the next dance of the planets, no more wasting time on what could have been, the “what-ifs.”  The wallflowers are us and we are better informed. No more posturing, no more wasting our time, no more listening to the talking heads. We look to the future gatherings of all the celestial bodies, not just the ones that come to excite, deflate and use our minds so we are addicted to their distortions of truth, their mongering, and their fighting over air waves.  We are here on earth observant of the truth, the facts, we want and receive only those words that speak that truth, and lead us to our most desired peaceful co-existence in this lifetime.   Hope you enjoyed the party. Oh, forgot to tell you.  Your St. Valentine’s Day invitation is in the stars, and will be delivered in time for the conclusion and bon voyage to this raucous Solar Eclipse.  Thanks for coming………..P.